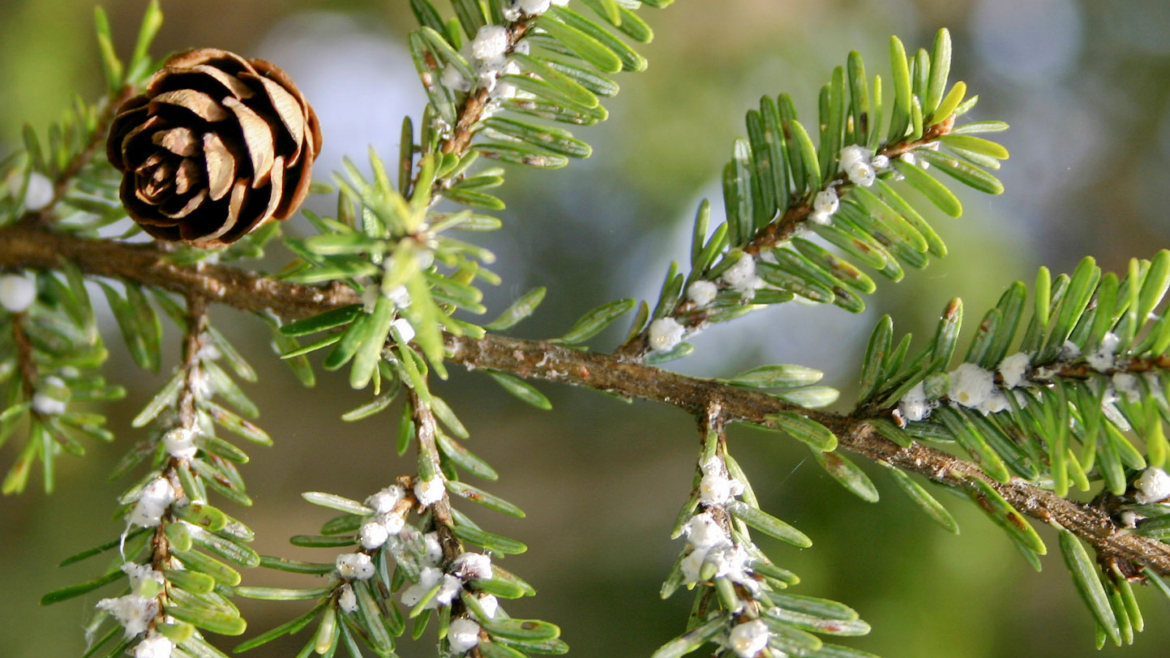 Hemlock Wooley AdelgidHemlock woolly adelgid, commonly abbreviated as HWA, is a true bug native to East Asia that feeds by sucking sap from hemlock and spruce trees. In eastern North America, it is a destructive pest that poses a major threat to the eastern hemlock and the Carolina hemlock. The range of Eastern Hemlock extends north of the current range of the adelgid, but there are fears that the adelgid could spread to infect these northern areas as well.

Accidentally introduced to North America from Asia in 1924, HWA was first found in the eastern United States some decades later. In Pennsylvania, for example, the earliest record is from 1967. The pest has now been established in eleven eastern states from Georgia to Massachusetts, causing widespread mortality of hemlock trees. As of 2007, 50% of the geographic range of eastern hemlock has been impacted by HWA.

The presence of HWA can be identified by its egg sacs, which resemble small tufts of cotton clinging to the underside of hemlock branches. Hemlocks stricken by HWA frequently shift to a grayish-green appearance rather than the dark green of healthy hemlocks. In North America, the hemlock woolly adelgid reproduces asexually and can have two generations per year. Between 100 and 300 eggs are laid in the woolly egg sacs beneath the branches. Larvae emerge in spring and can spread on their own or with the assistance of wind, birds and/or mammals. In the nymph stage, the adelgid is immobile and settles on a single tree.

The hemlock woolly adelgid feeds on the phloem sap of tender hemlock shoots. It may also inject a toxin while feeding. The resulting desiccation causes the tree to lose needles and not produce new growth. In the northern portion of the hemlock’s range, death typically occurs four to ten years after infestation. Trees that survive the direct effects of the infection are usually weakened and may die from secondary causes.

Get a FREE Estimate

This website uses cookies to improve your experience. We’ll assume you’re okay with this, but you can opt-out if you wish.
AcceptOpt-out
Manage consent

This website uses cookies to improve your experience while you navigate through the website. Out of these, the cookies that are categorized as necessary are stored on your browser as they are essential for the working of basic functionalities of the website. We also use third-party cookies that help us analyze and understand how you use this website. These cookies will be stored in your browser only with your consent. You also have the option to opt-out of these cookies. But opting out of some of these cookies may affect your browsing experience.
Necessary Always Enabled
Necessary cookies are absolutely essential for the website to function properly. These cookies ensure basic functionalities and security features of the website, anonymously.
Functional
Functional cookies help to perform certain functionalities like sharing the content of the website on social media platforms, collect feedbacks, and other third-party features.
Performance
Performance cookies are used to understand and analyze the key performance indexes of the website which helps in delivering a better user experience for the visitors.
Analytics
Analytical cookies are used to understand how visitors interact with the website. These cookies help provide information on metrics the number of visitors, bounce rate, traffic source, etc.
Advertisement
Advertisement cookies are used to provide visitors with relevant ads and marketing campaigns. These cookies track visitors across websites and collect information to provide customized ads.
Others
Other uncategorized cookies are those that are being analyzed and have not been classified into a category as yet.
SAVE & ACCEPT
Call Us Now