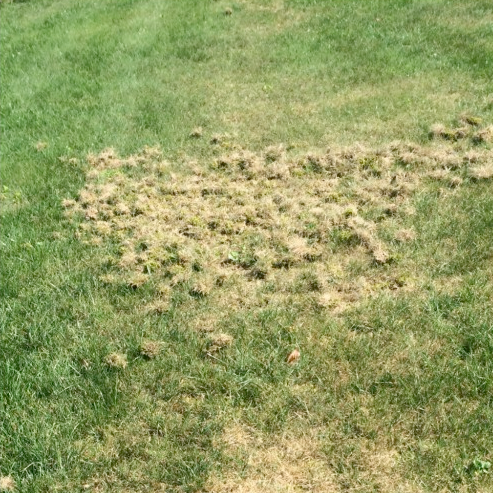 Weeds, unfortunately, are not the only pests that invade a lawn. Grasses are also vulnerable to attack by a number of insects. Our preventative grub control service is a granular application that is performed in May and early June to prevent your lawn from suffering white grub damage.

Below-ground insects, such as Japanese beetle grubs, billbug grubs and others of their type go after the roots. White grubs are root feeders, so they are generally found after the Spring thaw, in the top 2” of the soil. Damage occurs in early to mid-fall and again in late Spring, as the large grubs feed most actively. Affected areas first appear as drought stressed areas, with a general yellowing of the turf. Heavy feeding results in a total destruction of the root system. The turf may feel spongy to walk on, and the sod can be rolled back like a carpet.

Grubworms are thick, whitish, C-shaped larvae, which are the developmental stage of the May or June beetle or Japanese beetle. They range in size from 1/8 inch to 1 inch long. When the soil warms in late April or May, they come up and start eating at the grass roots. In late June to early July, they come out as the beetle. They stay above ground for a few weeks and then go back into the ground and lay their eggs the first part of August. As temperatures begin to drop in September and October, grub larvae feed voraciously and cause thousands in damage. They are eating the grass roots which in turn kill the turf. If a lawn has more than 10 grubs per square foot, it will probably suffer visible damage. With our application, we guarantee you won’t have grubs.

Get a FREE Estimate

This website uses cookies to improve your experience. We’ll assume you’re okay with this, but you can opt-out if you wish.
AcceptOpt-out
Manage consent

This website uses cookies to improve your experience while you navigate through the website. Out of these, the cookies that are categorized as necessary are stored on your browser as they are essential for the working of basic functionalities of the website. We also use third-party cookies that help us analyze and understand how you use this website. These cookies will be stored in your browser only with your consent. You also have the option to opt-out of these cookies. But opting out of some of these cookies may affect your browsing experience.
Necessary Always Enabled
Necessary cookies are absolutely essential for the website to function properly. These cookies ensure basic functionalities and security features of the website, anonymously.
Functional
Functional cookies help to perform certain functionalities like sharing the content of the website on social media platforms, collect feedbacks, and other third-party features.
Performance
Performance cookies are used to understand and analyze the key performance indexes of the website which helps in delivering a better user experience for the visitors.
Analytics
Analytical cookies are used to understand how visitors interact with the website. These cookies help provide information on metrics the number of visitors, bounce rate, traffic source, etc.
Advertisement
Advertisement cookies are used to provide visitors with relevant ads and marketing campaigns. These cookies track visitors across websites and collect information to provide customized ads.
Others
Other uncategorized cookies are those that are being analyzed and have not been classified into a category as yet.
SAVE & ACCEPT
Call Us Now